Skip to content Fulltone Standard Line OCD | Obsessive Compulsive Drive - Peach Guitars
We are open for pre-booked appointments only. To learn more about our appointment system, click the button to the right
Opening Hours
ACCOUNT
ADVICE & ENQUIRIES:
01206 765 777
CLOSE
HAVE A QUESTION?
CLOSE
SHARE WITH A FRIEND 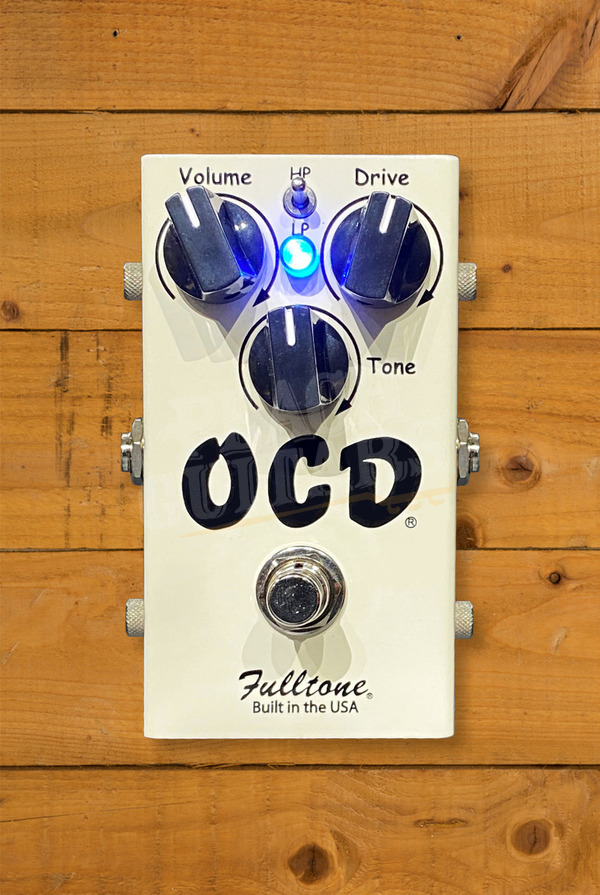 The Fulltone Obsessive Compulsive Drive (OCD) is an extremely open sounding Overdrive/Distortion circuit that differs from other overdrives in that it has a good bit more Dynamic-Range... meaning the difference between picking soft or picking hard will actually yield a more natural and wider range of distortion (with less compression) than traditional diode-clipped overdrives. The OCD also creates complex overtones without changing the inherent tone of whatever amp and guitar you're playing through, in the process lifting off that blanket other drive pedals can put on your signature sound.

RECEIVE BY:
ORDER WITHIN:
21 H
34 M
43 S
View In Showroom
Request an appointment with one of our team
UK Next day delivery
Fast shipping with trusted couriers, get it next day!
Free UK delivery over £99
What you see is what you will get!
WAYS TO PAY:

The OCD accomplishes its tube-like distortion through the unusual combination of overdriving its JFET opamp, and then hard-clipping with a pair of MOSFETs later on in the circuit. This topography did not exist in a pedal prior to the OCD, and the circuit works very well with a vast array of guitars and amps. Because of its large amount of available output volume, the OCD works great as a booster in front of amps to goose them into submission, as well as through Master-Volume amps to drive them much harder than most overdrives can, but it also excels at creating its own distortion with all the chime of a Class A amp and its complex array of overtones. The OCD gives you the feeling that your amp is cranked at even living room volume so clean playing is more dynamic and dirty sounds still have the ringing overtones.

This final version of the OCD (V2) has some exciting improvements over previous versions:

Class-A wired JFET input raising the impedance from all previous OCD version's 330K to 1 Mega ohm, thus interfacing better with all types of pickups, isolating the input from everything coming before the OCD in your signal chain, and giving the pedal more touch-sensitivity than any other OCD version, or any other pedal for that matter.

Buffered output completely isolates the the pedal from the influence of everything following it in the signal chain and allows much more sustain and overtones than previous OCDs, even at lower distortion settings.

Internally selectable True-Bypass (TB) or Enhanced Bypass (EB) switching. EB, a Fulltone innovation, is a vast improvement over the industry-standard, dynamic-robbing unity-gain JFET or Bi-Polar buffers used by other companies. Fulltone's EB doesn't have the out-of-phase issue and tone-loss inherent with most circuits either. True-Bypass was great back when we were only using a few pedals. But things have changed. Simply placing the V2 OCD (bypassed, in EB mode) in your signal path will recoup all of the lost tone and picking dynamics that standard buffered & TB pedals and cables cause.