Skip to content EarthQuaker Devices Pyramids | Stereo Flanging Device - Peach Guitars
We are open for pre-booked appointments only. To learn more about our appointment system, click the button to the right
Opening Hours
ACCOUNT
ADVICE & ENQUIRIES:
01206 765 777
CLOSE
HAVE A QUESTION?
CLOSE
SHARE WITH A FRIEND 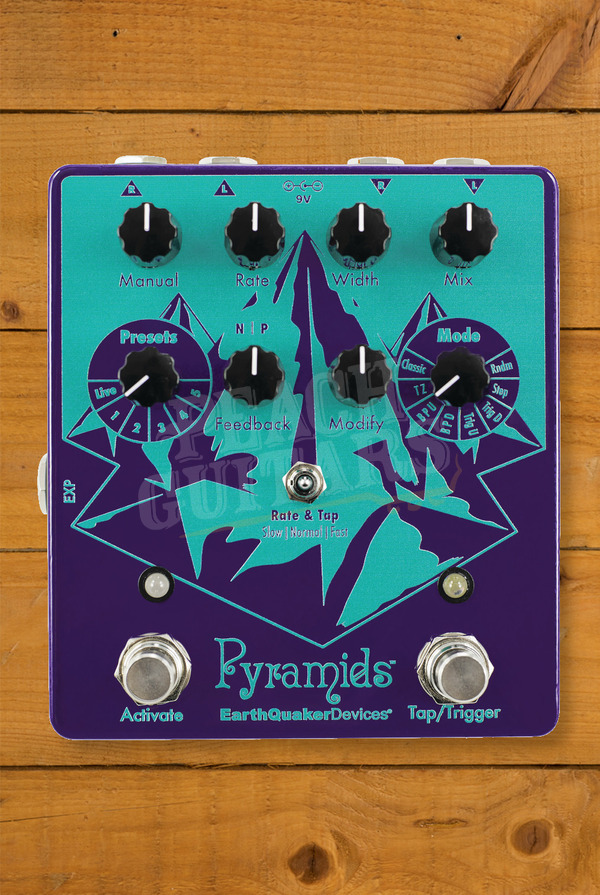 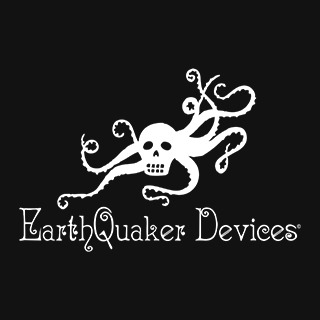 Pyramids is built upon the same proprietary DSP architecture as the Avalanche Run, only this time its way flangier.

RECEIVE BY:
ORDER WITHIN:
8 H
37 M
40 S
View In Showroom
Request an appointment with one of our team
UK Next day delivery
Fast shipping with trusted couriers, get it next day!
Free UK delivery over £99
What you see is what you will get!
WAYS TO PAY:

Pyramids is a stereo flanging Device with five presets, eight flanger modes, tap tempo, tap subdivision via the Rate & Tap mini-toggle, a multifunction Modify control, positive and negative Feedback, and a variable Mixcontrol, which is something you don't see on a flanger every day.

The modes are as follows:

Classic - Pyramids' Classic Mode delivers the classic jet-plane liquid-silk flanging sound we all know and love and have come to expect from any reputable flanging Device. Try this mode to recreate the sounds of old-school ADT (Automatic Double Tracking) effects as heard on records by those loveable mop-tops from England (you know which ones) and on the most ripping riffs to come from the NWOBHM.

Through-Zero - Try this one in stereo. In Through-Zero Mode, Pyramids gives you authentic tape-style flanging without all the calibration, biasing, demagnetizing of heads, and so on that a real tape machine - two of 'em, actually - requires. In ye olden days of real tape flanging, one tape was played straight through on one machine, while on another machine, a tape containing a copy of the guitar track played simultaneously as the recording engineer pressed down on the flange (tape reel) of the second machine, causing the second signal to vary in tempo and pitch. When the two signals are combined, the result is a psychedelic comb-filtering effect that sounds like a black hole collapsing on itself while the rest of the stars in the galaxy go supernova in unison. Savvy recording engineers discovered that if they introduced a delay on the dry signal by doing the exact same thing - pressing down on the flange of the other tape machine - they could achieve intensified, swirly, and dramatic cancellation as the two signals being flanged at different speeds nearly disappear at what's called the zero-point, hence the term Through-Zero flanging. We don't recommend Through-Zero flanging and driving, as the resulting sound is quite disorienting and may impair your ability to operate heavy machinery. But it's probably okay for playing heavy metal. And if you're going to Djent, please Djent responsibly. In Through-Zero Mode, the Modify control adjusts the delay of the dry signal and Manual controls the delay time of the wet signal. Experiment with these controls in unison to dial in the sweet spot for the dropout!

Barber Pole Up - Barber Pole flanging refers to an infinitely sweeping upward flange with no beginning, middle, or end. This, depending on your point of view, sounds either like Ms. Poppins taking flight with her umbrella, or a nightmarish, Kafkaesque hellscape where time is meaningless and we spend the rest of our natural lives staring into the void, forever dwellers on the threshold.

Trigger Up - Trigger Up Mode is similar to Barber Pole Up mode, minus the existential dread. The flanger still produces a continuous upwards sweep; except in this mode, your pick attack (or pressing the Tap/Trigger Switch) re-triggers the flange from the beginning. Its like getting a fresh start with every note! In Trigger Up mode, the Rate control adjusts how quickly the sweep reaches the top and Modify acts as a sensitivity control for the re-triggering effect.

Trigger Down - Trigger Down is exactly the same as Trigger Up, only the flanger sweeps downward. Cool, huh?

Step - Step mode tries to restore order to the universe by sweeping up and down in stepped increments, kind of like the sequencer on a synthesizer. In Step mode, the Modify control adjusts the glide between steps. Low Modify settings produce sharp, stair-stepped transitions between steps. Higher Modify settings introduce a smoother glissando effect.

Random - Random mode is like Step mode, except the sweep is randomized without reason or rhyme. Some men just want to watch the world burn.