Skip to content Catalinbread Boost, Fuzz & Distortion Series | Naga Viper - Peach Guitars
We are open for pre-booked appointments only. To learn more about our appointment system, click the button to the right
Opening Hours
ACCOUNT
ADVICE & ENQUIRIES:
01206 765 777
CLOSE
HAVE A QUESTION?
CLOSE
SHARE WITH A FRIEND 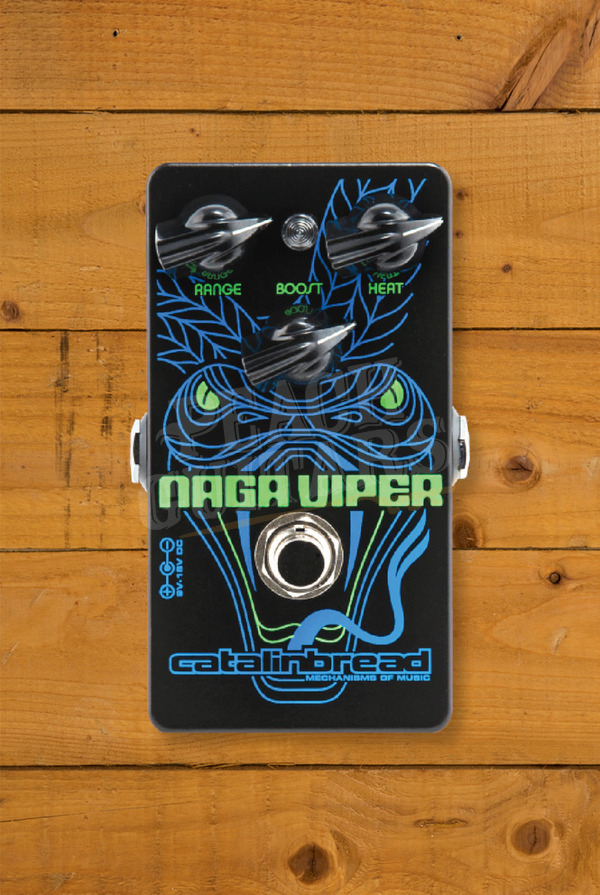 The Catalinbread Naga Viper is their take on the classic Dallas Rangemaster Treble Booster with added features allowing users to dial it in with any amplifier.

RECEIVE BY:
ORDER WITHIN:
21 H
59 M
17 S
View In Showroom
Request an appointment with one of our team
UK Next day delivery
Fast shipping with trusted couriers, get it next day!
Free UK delivery over £99
What you see is what you will get!
WAYS TO PAY:

The Naga Viper is a booster in the grand old tradition of the Dallas Rangemaster "Treble-Booster".  The Rangemaster has been used by many influential British guitarists including Tony Iommi, Brian May, Marc Bolan, and KK Downing and Glen Tipton of Judas Priest.  These guitarists, while completely unique in their styles, share the Rangemaster secret of boosting their cranked tube amps into a juicy, harmonic-laden rock tone that always cuts through the mix.

The Naga Viper is our version of this famous circuit and it enhances the classic circuit with the addition of two extra controls - Range and Heat.  The original Rangemaster had just one control - Boost.  The Range knob is a continuous control allows you to go from classic treble-boost to a full-range boost and anywhere in-between.  The original could only function as a "treble-booster".  The Heat knob gives you control over the gain level, unlike the original which was fixed at maximum gain.

Why a "treble-booster"?  Well, it is not like merely turning up the treble control on an EQ pedal.  Besides enhancing treble response, it adds its own subtle harmonic distortion and gives you a lot of "push" to really saturate the front-end of your tube amp.  But remember, the Naga Viper has a Range control that allows you to dial in exactly what frequencies get boosted.

The traditional way to use a treble-booster is to plug it straight into an already cranked and overdriven tube amp like the Marshalls, Laneys, and Voxes the British guitarists used.  Since the amps were already cranked up, a full-range boost would result in a muddy sound with no definition.  That is why we want to boost "treble"!

But in this modern era of electric guitar, many guitarists use overdrive pedals that emulate the sounds of cranked big amps into their smaller combos.  The Naga Viper is carefully voiced to allow you to boost your "amp-in-the-box" pedals too to get those famous juicy, saturated sounds at "reasonable" volume levels!  In particular, the Naga Viper was made to go with our Dirty Little Secret MkII and CB30 overdrives.