Skip to content Friedman Vintage 112 CAB (JJ JNR series) - Peach Guitars
We are open for pre-booked appointments only. To learn more about our appointment system, click the button to the right
Opening Hours
ACCOUNT
ADVICE & ENQUIRIES:
01206 765 777
CLOSE
HAVE A QUESTION?
CLOSE
SHARE WITH A FRIEND 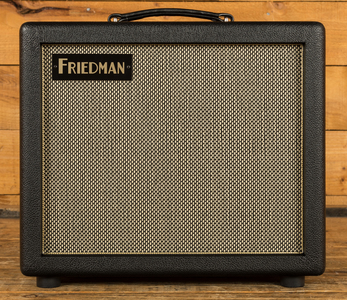 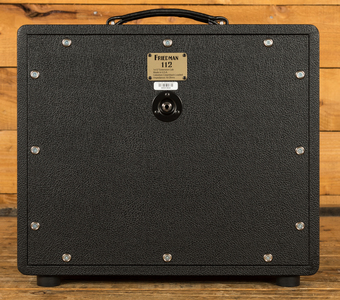 RECEIVE BY:
ORDER WITHIN:
4 H
36 M
38 S
View In Showroom
Request an appointment with one of our team
UK Next day delivery
Fast shipping with trusted couriers, get it next day!
Free UK delivery over £99
What you see is what you will get!
WAYS TO PAY:

Dave Friedman has been designing and building guitar rigs for the stars since the early nineties. After two decades of modding amplifiers and consulting for other well-known amplifier companies, Dave finally brought his talent to a new line of production amps under his name Friedman Amplification.

Probably the most important of all the Friedman artists is Alice in Chains main man Jerry Cantrell. Having spent time honing and perfecting the rig that delivers Jerry's dynamic and at times crushing tone, through their previous collaboration, the JJ-100, they decided to deliver that same tonal magic into a stage friendly 20-watt monster, the JJ-Junior.

The Friedman 112 Vintage is a closed back, front ported extension cabinet which utilizes tongue and groove Baltic Birch construction to deliver the bass, mid response and great sound you would expect from a Friedman 1x12 cab.  The 112 Vintage cab was designed to match perfectly to the JJ-Junior head, Jerry Cantrell's signature 20-watt all-tube head.

At the heart of the cab is a Celestion G12M-65 Creamback 16 Ohm speaker. The G12M Greenback is perhaps the definitive vintage Celestion ceramic magnet guitar speaker. Developed in the mid-sixties, it was quickly adopted by players like Hendrix, Beck and Page, who typified the louder and more aggressive blues-rock playing styles that came to characterize that era. The higher power handling G12M-65 Creamback used in the Vintage 1x12 produces that familiar woody tone, making it ideally suited when both vintage and modern tones are desired. The increased power handling brings with it low end grunt complementing the warm and vocal mid range, crunchy upper mids and sweet, refined highs.