Skip to content TC Helicon Ditto Mic Looper Pedal - Peach Guitars
We are open for pre-booked appointments only. To learn more about our appointment system, click the "OPENING HOURS UPDATE" banner below.
ACCOUNT
ADVICE & ENQUIRIES:
01206 765 777
CLOSE
HAVE A QUESTION?
CLOSE
SHARE WITH A FRIEND 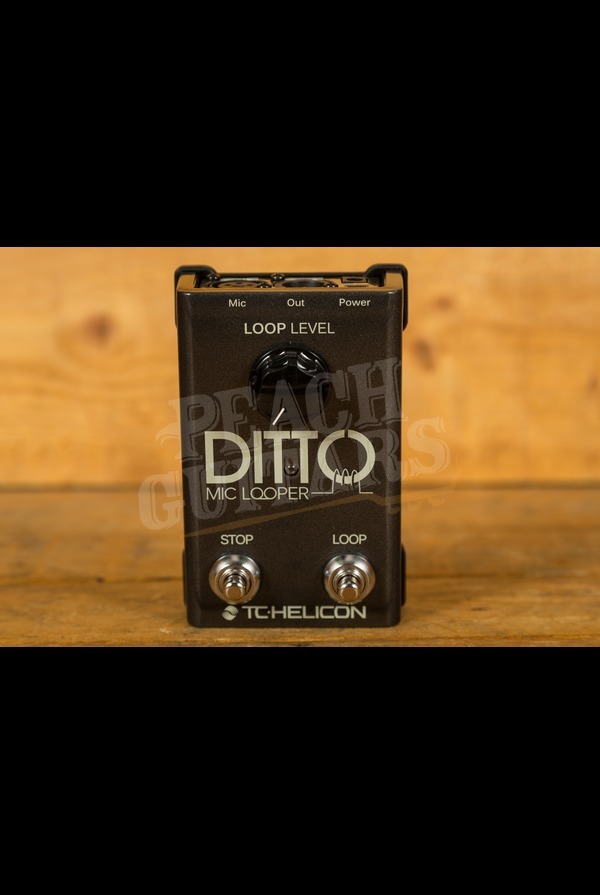 RECEIVE BY:
ORDER WITHIN:
16 H
32 M
7 S
View In Showroom
Request an appointment with one of our team
UK Next day delivery
Fast shipping with trusted couriers, get it next day!
Free UK delivery over £99
What you see is what you will get!
WAYS TO PAY:

Go from idea to performance in an instant and build layered masterpieces with ease. One knob, two buttons - it couldn't be simpler! With its superior audio quality, unlimited overdubs and Undo/Redo, the Ditto Mic Looper is the essential choice for looping vocals and mic'ed instruments.

Pure Looping, No Feature Fluff
The original Ditto Looper, from our sister company TC Electronic, was an overnight sensation because it delivered exactly what musicians were looking for: pure looping without feature fluff. Ditto Mic Looper continues this tradition and further shortens the distance between creative spark and performance by
adding automatic mic gain - making setup painless, accidental on-stage bumps a thing of the past and your performance distortion-free. Also loops are stored, meaning that the last fantastic loop you worked on remains in Ditto Mic Looper all ready-to-go, even after you power it down.

Automatic Mic Gain - What is that?
It's the clever engineering that means you never have to worry about input levels again. No more trial-and-error to find the optimal balance between input gain on your FX unit and the mixing desk. Using Ditto Mic Looper is exactly like plugging a mic directly into the PA - you only need to set input gain once, at the mixer.

Evolve Your Craft
Even if you haven't looped a single musical phrase in your life, you'll still love Ditto Mic Looper. Here's why: Press LOOP to record. Press again to play the loop. Repeat for endless overdubs. Hold to undo/redo latest overdub. Press STOP to pause all loops, press again to resume play - or hold it for a quick, noiseless erase. It's just that simple. As a singer, beatboxer, horn-blower, or string-player, the power and musical ease afforded by Ditto Mic Looper
cannot be overstated. Even the faintest musical idea can be explored, built up, torn down and just plain enjoyed in private, practice
or performance. However you use it, Ditto Mic Looper is the perfect way to evolve your craft.

Two Switches Are Better Than One
Wouldn't a single-switch pedal be the simpler approach - save space and just have one button for everything? Actually, no. The dedicated STOP switch on Ditto Mic Looper means that you can pause your loop exactly when and where you want it, without fudging your timing by having to double-tap to stop. Also, holding down STOP to erase won't cause any unwanted playback - as on most single-switch pedals. While some one-button loopers claim to offer noise-free erase, they do it by slowing the reaction time of the LOOP switch so it only plays when you release the switch, which can seriously mess with your groove! Finally, on Ditto Mic Looper you get to decide the order of the LOOP switch actions - Record/Play/Overdub or Record/Overdub/Play - to suit your personal style.

The Sound of Control
Ditto Mic Looper carries with it the high-fidelity hallmark of the entire Ditto family: 24-bit uncompressed (and uncompromised) audio. Paired with a great-sounding mic preamp and phantom power to boot, you can pick and choose between your favorite dynamic and condenser mics. But, as a vocalist you may not be comfortable using a pedal. No problem - simply plug in an MP-75 microphone to the Ditto Mic Looper and experience the creative freedom of creating, playing, stopping, undoing and erasing loops directly from the mic. We call it Mic ControlTM, and because of it, you command both the stage and the  audience.

Go Anywhere From Here
With Ditto Mic Looper, you'll always have the strength in numbers. You can create anything, be everything at once. Construct an entire choir with your voice, turn violin into symphony, or create the biggest brass band on Earth with your trumpet. When inspiration strikes you only have to do what comes naturally, Ditto Mic Looper makes sure of that.