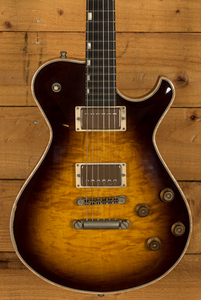 WAS: £5,199.00
RECEIVE BY:
ORDER WITHIN:
15 H
27 M
0 S
UK Next day delivery
Fast shipping with trusted couriers, get it next day!
Free UK delivery over £99
What you see is what you will get!
Photos of actual item
The item photographed, is the exact item you will receive!
WAYS TO PAY:

With a back catalogue that includes Michael Jackson, Billy Idol and the theme song from Top Gun, Steve Stevens is one of the worlds most recognisable players. When you are at the top of the game you get your pick of the best gear, and Stevens preferred guitars of choice are his signature line from Knaggs.

The Steve Stevens SSC is a superb players guitar that delivers massively on tone, playability and versatility. With the classic tonewood combo of Mahogany and Maple the SSC T1 is perfectly balanced and super resonant. Finished in the super cool Nitro Tobacco Burst Gloss, it's a guitar that is ready to hit the stage every night.

Carefully aged in house by Knaggs, this guitar plays like the best new guitars you've ever laid you're hands on but looks as if it's travelled all the way back from 1959...

The Mahogany neck features an Ebony fingerboard with block inlays; with great access right up the neck this guitar is at home playing a wide range of styles. With Kluson tuners and a Tone Pro Tune-O-Matic bridge, this guitar has great tuning stability and a really nice playing action. With a duo of Bareknuckle SSC pickups, which are based on the popular Mule model and feature Alnico IV magnets, these PAF inspired pups were selected for their supreme versatility.

The attention to detail and innovation on display here is equal to the very best on the market, Joe Knaggs is one of the worlds premier master luthiers and with guitars as majestic as this who are we to argue!