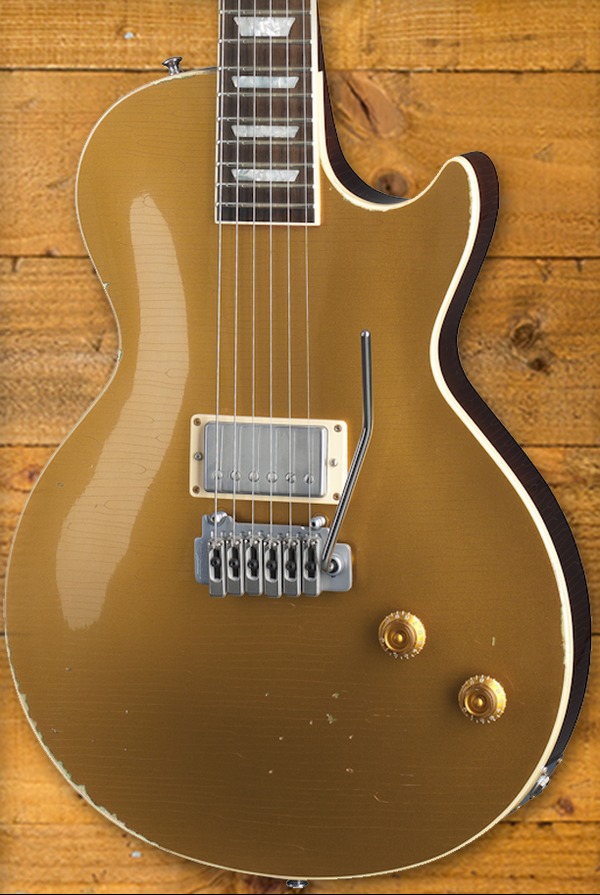 On the list of iconic Les Paul slingin' rock guitarists, there are few more important than Joe Perry. A key part of the Aerosmith sound, he helped pen classic tracks such as Dream on, Walk This Way and Crazy. Splitting his time between Aerosmith and his supergroup Hollywood Vampires with Alice Cooper and Johnny Deep, Joe Perry remains a rock icon.

The Gibson Joe Perry Gold Rush Les Paul is the product of years of creative collaboration between Joe and Gibson, the end result being a Les Paul that represents everything Perry has come to want and need from a Les Paul.

With a Mahogany body, this Les Paul benefits from a 2-piece plain Maple top for the ultimate tonewood partnership. Rich and super resonant it offers premium tone and timeless aesthetics, while the Aged Antique Gold finish looks a million dollars and really allows the wood to breathe and the natural tone to sing through.

The Mahogany neck is topped with a crisp Indian Rosewood fingerboard with classic Gibson Trapezoid inlays, this guitar looks every bit the real deal. With a 24.75" scale length and 22 frets, it retains that classic Les Paul feel. The Wilkinson/Gotoh VS100N tremolo bridge offer an alternative, modern vibe.

The defining feature of the Gibson Custom Gold Rush is the single Gibson 498T humbucker. Super-hot and with a push/pull coil split, it has an ultra-rich harmonic quality.

There are only 125 unsigned models worldwide, so don't miss out!