Skip to content EQD Data Corrupter | Modulated Monophonic Harmonizing PLL - Peach Guitars
We are open for pre-booked appointments only. To learn more about our appointment system, click the button to the right
Opening Hours
ACCOUNT
ADVICE & ENQUIRIES:
01206 765 777
CLOSE
HAVE A QUESTION?
CLOSE
SHARE WITH A FRIEND

CLOSE
PERSONALISE YOUR ITEM for an additional
CLOSE
BULK ORDER QUOTE
Stock Email
Request A One-On-One Appointment
Let us know what you would like to see, and our team will prepare everything for your one-on-one appointment at our showroom.
Plek This Guitar
Please read the terms & conditions below before confirming that you wish for us to including a Plek setup on this guitar.
Choosing to have your purchased guitar Plekd will delay the shipping. One of the team will be in contact with a rough ETA but we will endeavour to have your new guitar with you as quickly as possible.
If you choose to return the guitar after its had a Plek setup you will still be liable for the cost of the plek setup except for in cases where weve offered it as part of a promotion or offer.
View full terms & conditions
I have read and accept the terms & Conditions
Home / Effects / Pitch & Synth FX
Peach Guitars
VIEW BRAND COMPARE
SHARE 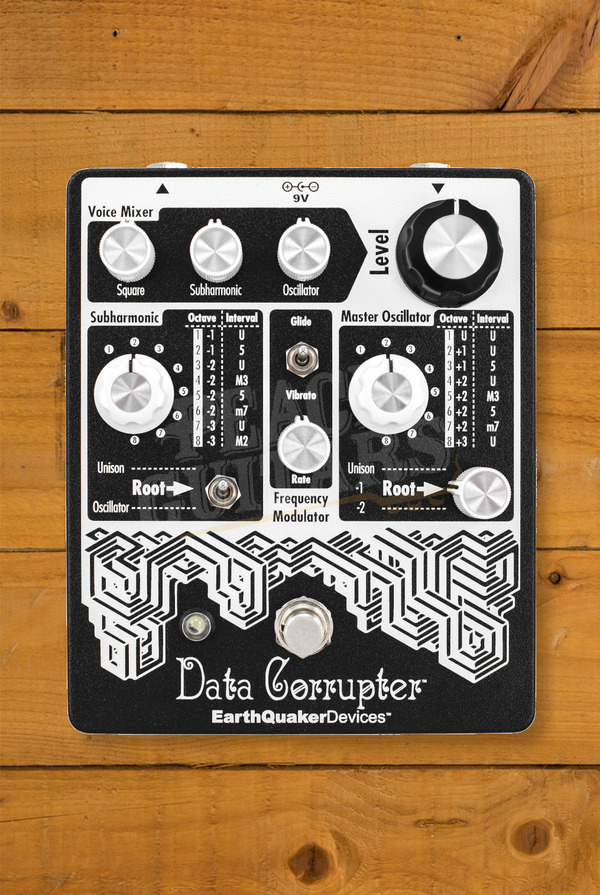 The Data Corrupter is a monophonic analogue PLL harmonizer with modulation. It takes your input signal and brutally amplifies it into a crushing square wave fuzz tone that is then multiplied, divided and modulated to create a wild, yet repeatable, three-voice guitar synthesizer.

RECEIVE BY:
ORDER WITHIN:
22 H
55 M
36 S
View In Showroom
Request an appointment with one of our team
UK Next day delivery
Fast shipping with trusted couriers, get it next day!
Free UK delivery over £99
What you see is what you will get!
WAYS TO PAY:

The Frequency Modulator applies pitch-bend modulation to the Master Oscillator. In Glide mode, youll hear a smooth portamento as each note slides into the next. In Vibrato mode the pitch modulates up and down for a retro sci-fi laser effect.

Finally, (or is it?) the Square control located top-left on the Voice Mixer blends in a fuzzed-out square-wave take of your input in its original octave. That's it. These aren't the droids we're looking for. Move along.

Each and every Data Corrupter is built one-at-a-time by a team of ensigns aboard the Starship Enterprise locked in orbit around the Borg Cube of Akron, Ohio, USA. Make it so. Engage.