Our store will be closing at 4pm today (23/09) online orders and dispatches will continue as usual.
ACCOUNT
ADVICE & ENQUIRIES:
01206 765 777
CLOSE
HAVE A QUESTION?
CLOSE
SHARE WITH A FRIEND 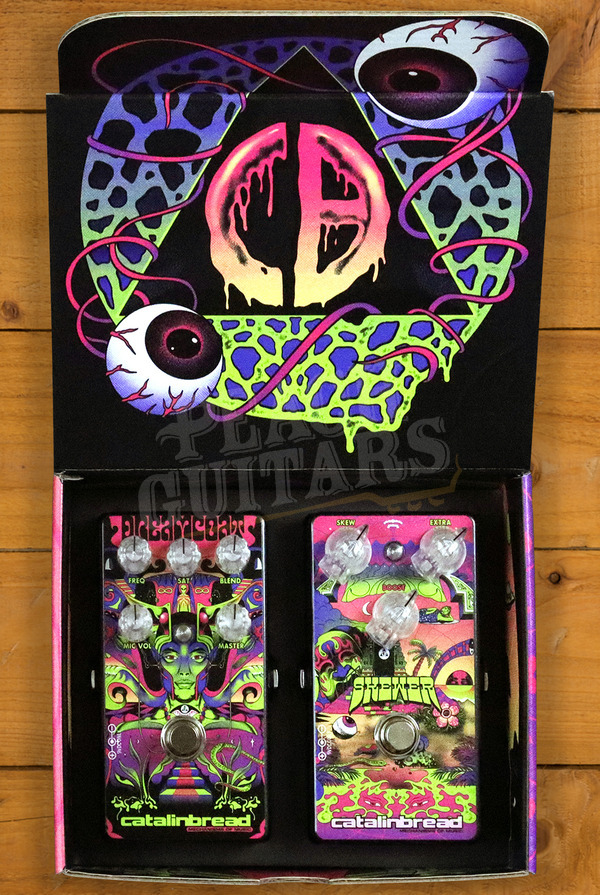 One of the most iconic tones of all time belongs to the legendary Ritchie Blackmore, his sound is the stuff of legend and has been envied for decades. Now with this super cool Catalinbread boxset you too can achieve tonal bliss.

RECEIVE BY:
ORDER WITHIN:
22 H
47 M
52 S
View In Showroom
Request an appointment with one of our team
UK Next day delivery
Fast shipping with trusted couriers, get it next day!
Free UK delivery over £99
What you see is what you will get!
WAYS TO PAY:

Catalinbread consist of a small team of musicians, gear heads and artists who have a passion for great sound and great quality. Based in Oregon, Catalinbread guitar effects pedals are some of the best in the business, with their pedals all handmade on site by their team. Owner Nicholas Harris has always pointed the company towards producing great kit that their team want to play, with over 200 years of combined playing experience the Catalinbread team have a keen ear and extreme dedication which allows them to produce top quality pedal sounds.

One of the most iconic tones of all time belongs to the legendary Ritchie Blackmore, his sound is the stuff of legend and has been envied for decades. Now with this super cool Catalinbread boxset you too can achieve tonal bliss.

Designing the Dreamcoat began as an exploration of Ritchie Blackmores tone evolved into a multidimensional gain machine capable of anything between unruly sputtery fuzz and classic rock chime. The Dreamcoat has the exact specs of theAiwa TP-1011 reel-to-reel preamp that Blackmore used; with some extra features. It can be an unruly, velcro-y, and sputtery beast, but one that can be tamed at low levels for a more classic rock approach. Adjusting the "Freq" parameter control the amount of boost at a specified frequency band which can be set with the internal trimmer. When the knob is fully counter-clockwise, its out of the circuit. When you turn it up all the way, youll get a full 10dB boost at the selected frequency. The helpful "Blend" control blends the signal coming out of the Freq control with the Aiwa deck circuit. Nudge it south-of-max to gain back some of your pick attack, and turn it all the way down to hear just the EQd dry signal. Using the "Sat" control gives you an extra layer of grunt, allowing the Dreamcoat to range between near-dry tonal indifference to complete "melting-amp" Neil Young-esque tweed sounds. "Mic Vol is the original distortion control of the Aiwa deck and the "Master" works as an overall Master volume for the pedal

One of Blackmore's most recognizable pieces of gear from his arsenal is ofcourse his old Hornby-Skewes Treble Booster. While almost all of them used a Rangemaster, the Hornby-Skewes version came stock with a silicon transistor for a more biting sound that cut through even the densest of mixes. The Skewer stays true to that circuit letting you dial in the desired frequency raunge from rich and full to treble-heavy,as well as control the amount of boost.You can also vary the amount of transistor gain for some extra juice.Further enhancements include a noise reduction filter and anti-pop switch circuitry. This one bites just a little harder than their Naga Viper, and sounds fantastic with the DREAMCOAT.