Skip to content Synergy Bogner Ecstasy - 2 Channel Preamp Module - Peach Guitars
We are open for pre-booked appointments only. To learn more about our appointment system, click the "OPENING HOURS UPDATE" banner below.
ACCOUNT
ADVICE & ENQUIRIES:
01206 765 777
CLOSE
HAVE A QUESTION?
CLOSE
SHARE WITH A FRIEND 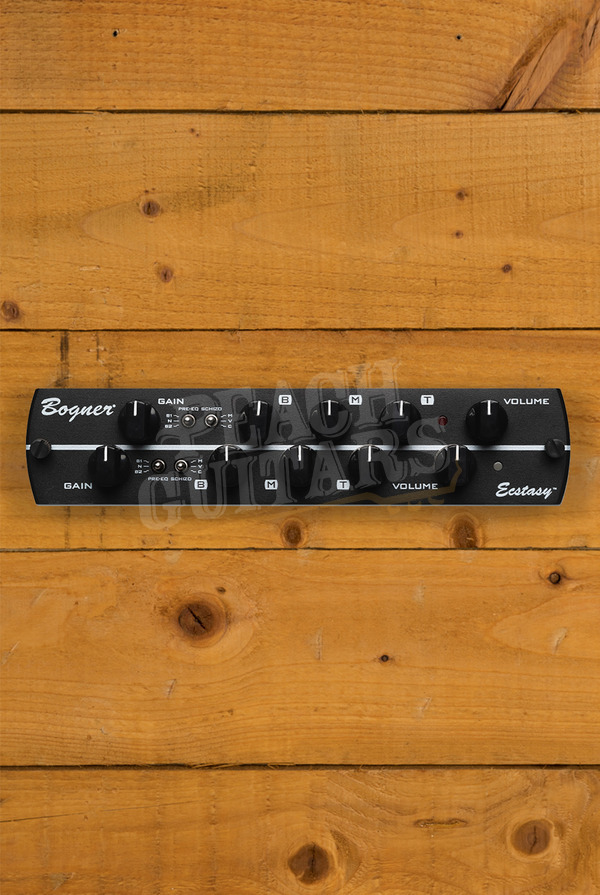 RECEIVE BY:
ORDER WITHIN:
2 H
36 M
37 S
View In Showroom
Request an appointment with one of our team
UK Next day delivery
Fast shipping with trusted couriers, get it next day!
Free UK delivery over £99
What you see is what you will get!
WAYS TO PAY:

Reinhold Bogner is a king in the world of boutique high gain.  You can  find his amps backing up a wide range of A-list players, such as Alice In Chains Jerry Cantrell, Alter Bridges Mark Tremonti, Steve Lukather, George Lynch, Eric Johnson and even the late, great Walter Becker. Much of Bogners appeal comes from his legendary Ecstasy 100-watt head.

The Ecstasy is so popular that players demanded Synergy work with Reinhold to distill it down into this preamp module which is two years in the making. The Blue channel - based on the Ecstasys rock n roll-approved second channel - offers shades of gain that, when combined with two, 3-position Pre-EQ and Schizo switches, cover everything from blues to hard rock. Switch over to the Red channel, and the same control layout brings in layer after layer of harmonically rich gain, perfect for wide-open leads and metal.   With the Synergy Ecstasy module you can now have all of the harmonically rich overtones, searing high gain, plexi-style punch, and note definition of the original amp at a fraction of the cost.

By partnering with such iconic amplifier designers as Reinhold Bogner, Synergy is able to offer you the most sought-after tones in all-tube designs that are perfect for the direct-recording, lower-stage-volume, and compact-guitar-rig demands of today. Its easy to see why the Synergy preamp module system is taking the industry by storm.