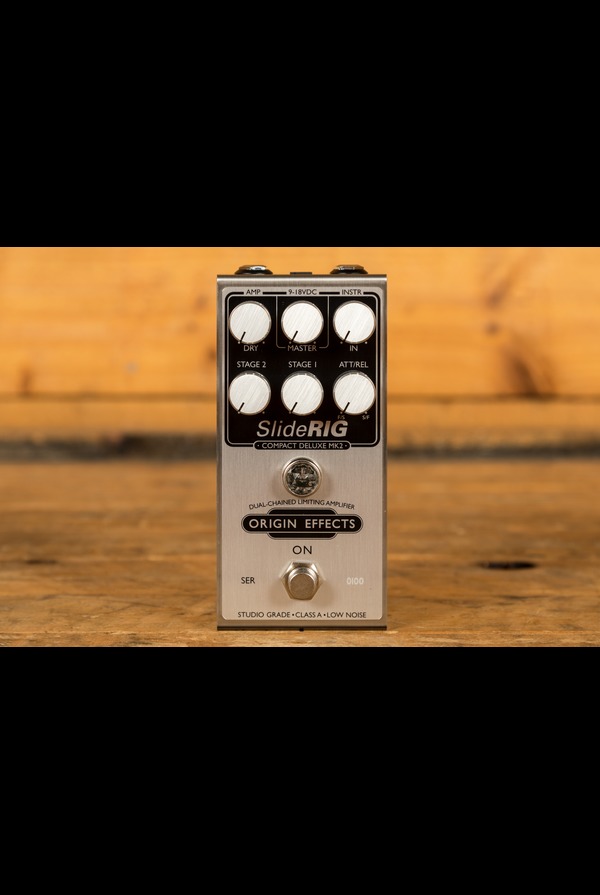 From a small barn in the Oxfordshire countryside, to global domination, Origin Effects produce highly-musical, superior-quality audio-tools, far superior to any off the shelf effects pedals. Hand built and hand finished at the Origin Headquarters, each pedal is expertly calibrated, assembled and tested to the highest quality by their highly skilled team.

The SlideRIG is one of the most highly regarded compressor pedals on the market. Favoured by tone pioneers such as David Gilmour, Peter Frampton and Joey Landreth, the SlideRIG Compact Deluxe Mk2 is the next evolution of this iconic circuit.

Daisy-chaining a pair of outboard compressors together is an old studio trick made famous by Lowell George of Little Feat, who achieved his legendary, endlessly sustaining slide guitar sound by recording straight into the desk via first one Urei 1176 and then another. This was the inspiration behind the original SlideRIG.

The updated SlideRIG Compact Deluxe Mk2 brings additional levels of adjustability to the SlideRIG design, With one knob, users can simultaneously adjust the response of both compression stages, changing the initial transient of each note from glassy and percussive at one extreme (slow attack, fast release) to smooth and uniform at the other (fast attack, slow release). The range of this control has been carefully tuned to optimise signal-to-noise ration and avoid any undesirable distortion artefacts, even at extreme levels of compression, so you don't need to be a studio technician to dial in killer dual-compressor tones.

This pedal is sure to be a staple on touring boards across the globe, this is the sound you crave in the studio, at your feet.