CLOSE
PERSONALISE YOUR ITEM for an additional
CLOSE
BULK ORDER QUOTE
Stock Email
Request A One-On-One Appointment
Let us know what you would like to see, and our team will prepare everything for your one-on-one appointment at our showroom.
Plek This Guitar
Please read the terms & conditions below before confirming that you wish for us to including a Plek setup on this guitar.
Choosing to have your purchased guitar Plekd will delay the shipping. One of the team will be in contact with a rough ETA but we will endeavour to have your new guitar with you as quickly as possible.
If you choose to return the guitar after its had a Plek setup you will still be liable for the cost of the plek setup except for in cases where weve offered it as part of a promotion or offer.
View full terms & conditions
I have read and accept the terms & Conditions
Home / FX Pedals
FX Pedals
COMPARE
SHARE 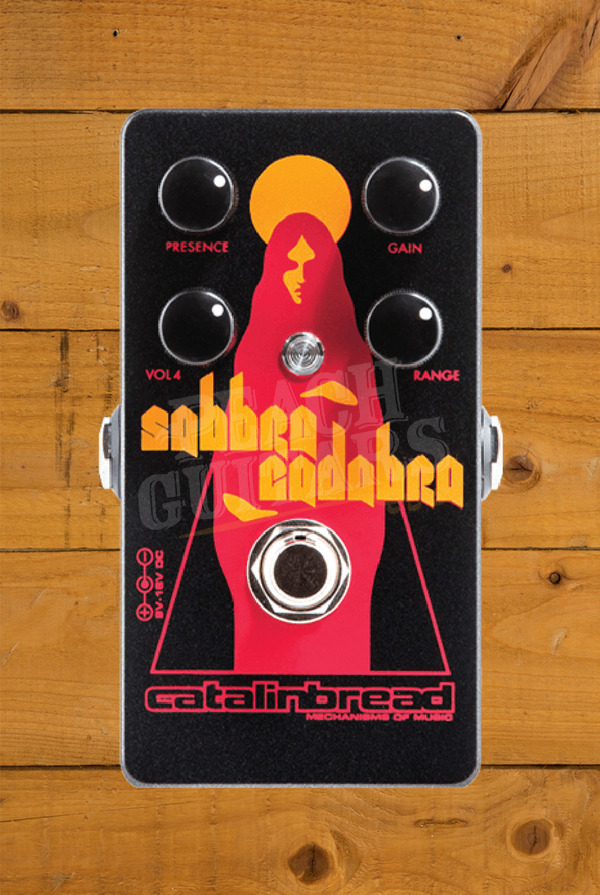 RECEIVE BY:
ORDER WITHIN:
10 H
10 M
18 S
View In Showroom
Request an appointment with one of our team
UK Next day delivery
Fast shipping with trusted couriers, get it next day!
Free UK delivery over £99
What you see is what you will get!
WAYS TO PAY:

Based not too subtly on Tony Iommi's sound and the Black Sabbath imagery, this excellent pedal is aiming for a Treble booster into a Laney supergroup signature sound of Tony, and packs a punch that makes biting the head of a bat seem tame by comparison.

Here's what Catalinbread have to say about it:

"The Sabbra Cadabra is a custom-tuned Rangemaster-based booster combined with the pre-amp section of a Laney Supergroup. The two circuits are carefully voiced together to achieve the riffs of doom tone that Tony Iommi is so well known for. Four controls (RANGE, GAIN, PRESENCE, and VOL 4) allow you to fine-tune the response to your guitar and rig. If you're familiar with Sabbath's live album, 'Past Lives', then you'll understand where we were going with this pedal - huge, raw, responsive!

The Sabbra Cadabra's circuit is optimized for drop-tuning but works equally well for standard tuning thanks to the RANGE control, which allows you to "customize" the treble-booster section of the circuit and adjust it anywhere from treble-boost to full-range boost.

According to Mr. Iommi, someone modded his Dallas Rangemaster. "I don't know what he did to it, but it was really good. I used that treble booster on all the early Sabbath albums and put it into the Laney because it boosted the input and gave it the overdrive I was looking for, which amps in the early days didn't have." Then in 1979 another tech threw it into the garbage, thinking it was crap. Can you believe that?! So no one really knows what was done to it. But based on our experience, it was most likely changing it to be more of a full-range boost and possibly re-biasing it. That's what we mean when we say you can "customize" the treble-boost section with the RANGE knob - you can continuously adjust it to any input frequency response and feel that you want."